View products
Borneo is the third-largest island in the world and the largest in Asia. It is also the only island in the world that is politically administered by three separate nations - Malaysia, Indonesia, and Brunei. It is also home to one of the world's oldest rainforest that is thought to be over 140 million years old. As such it is not only a hugely diverse island politically speaking but this diversity is compounded when one takes into account the enormous variety of flora and fauna that the region offers. It is the center of the evolution of many of the world's endemic species of plants and animals and is the home to one of the few remaining natural habitats of the very endangered Bornean orangutang. Likewise, it is a refuge for many endemic forest species like the Borneo elephant, the eastern Sumatran rhinoceros, the Bornean clouded leopard and the Dayak fruit bat. Peat, one of the world's most precious and endangered natural resources, makes up the swamps that occupy the entire coast of Borneo. This soil hosts numerous birds species like rhinoceros hornbill. And the number of different species is astounding with there being 15,000 species of flowering plant, 3000 species of tree, 221 terrestrial mammals, 420 species of birds, and 440 species of freshwater fish. The low-land rainforest and peat swamps give way to freshwater swamp forests and mangroves, as well as highland rain forests, subtropical grasslands and savannahs. With all this in mind, it is easy to say that Borneo is one of the most diverse places on earth and can be separated into a kaleidoscopic array of categories. We have made sure that our Borneo range draws on this by offering you a huge variety of options and applications.

This series has been specially designed for gamers and drone users. Coming with all the necessary components for gaming accessories including numerous pockets, this elegant and versatile range offers capacious carrying solutions for gamers and Drone pilots alike. It enables you to carry around Quadcopters, flying cameras and other types of Drone and gaming equipment, as well as laptops and all the more conventional accessories. All bags from the range clearly also double as the perfect companion for business trips and other forms of travel.

There is no reason to take any chances with your equipment. It is vital to make sure that every item of yours remains free from harm, and in particular from damage by moisture at all times. Often this can be tricky on your daily commute and so we have made sure that this range is carefully crafted using high-quality water-resistant fabrics. This means that if you are unfortunately caught out by a shower on the way to work, or if the heavens open when you're out flying your drone, you needn't be concerned about any kind of costly damage to your most precious belongings.
+ 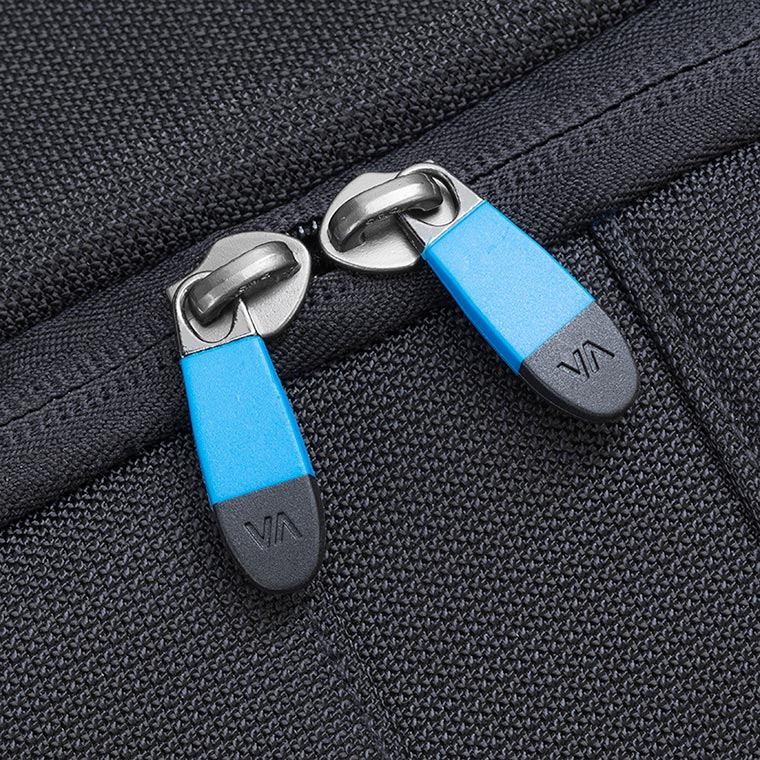 There is nothing worse than a bag that comes with flimsy pulls that let you down at the most inopportune of moments. This kind of short-shelf life design is anathema to RIVACASE because we believe in constructing durable products that serve the customer years and years into the future. That is why we have made sure that this Borneo range comes with its own specially designed RIVACASE zipper pulls so that you can be robust with your bag if you need to be, and yet rest safe in the knowledge that you won't damage your bag and it won't be spilling its contents all across the ground when you need to be on your way.

With this Borneo range, nothing has been left to chance. Your electronic items are our top priority and their protection our ultimate concern. That is why we have made sure that this collection comes with shock-absorbing EVA padding for maximum protection. This foam material will give you and your devices the ultimate protection they need, whilst also ensuring that you are not unnecessarily weighed down. This means that you can move around your day with ease and rest easy in the knowledge that when inevitable knocks and nudges arise, that your precious belongings will be safe and happy in your Borneo bag.
+ 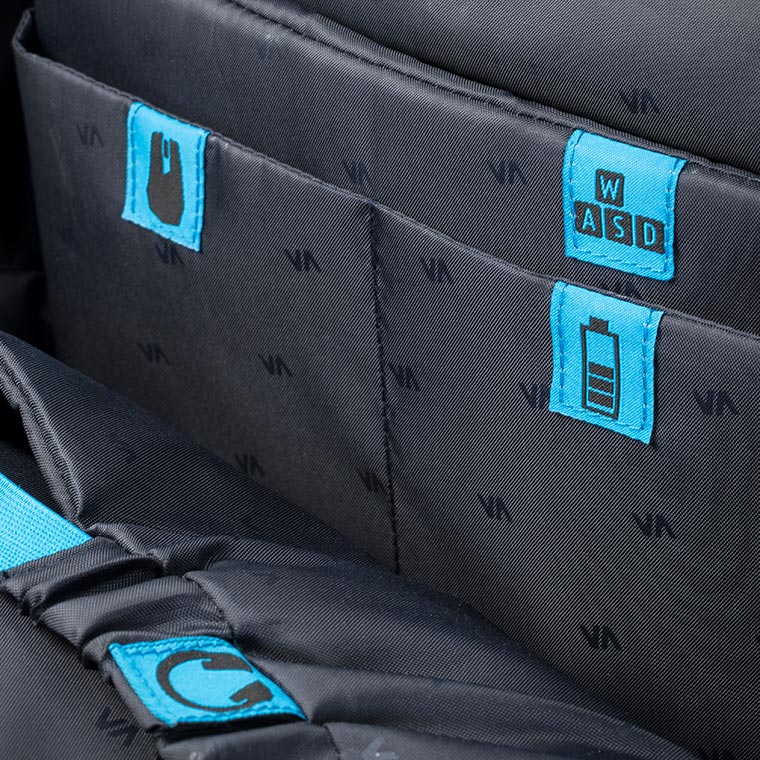 No matter how good a car looks on the outside, it's what's on the inside that really counts. Similarly, a good suit is really brought alive by a good inner lining that is both comfortable and catches the eye. It's also the small things in life that really make the difference, like the fresh scent of sea salt on the beach or of freshly mown grass in the summer. For all these reasons we have made sure that the inside of this bag is as good as the outside with the incredible detail of the VA-printed interior lining.

The whole collection of this range is typified most perhaps by the enormous options in compartments it offers. Just like the jungles of Borneo the Borneo bag contains a huge diversity of options. There are pockets and slips for your wires and your phones, for your charges and your mouses. And there are pockets for your consoles and your drone, for your laptop and your documents. Whatever it is that you need to carry with you on your day know that the Borneo bag will have you covered so that you can move about your day with everything organized and secure.
+ 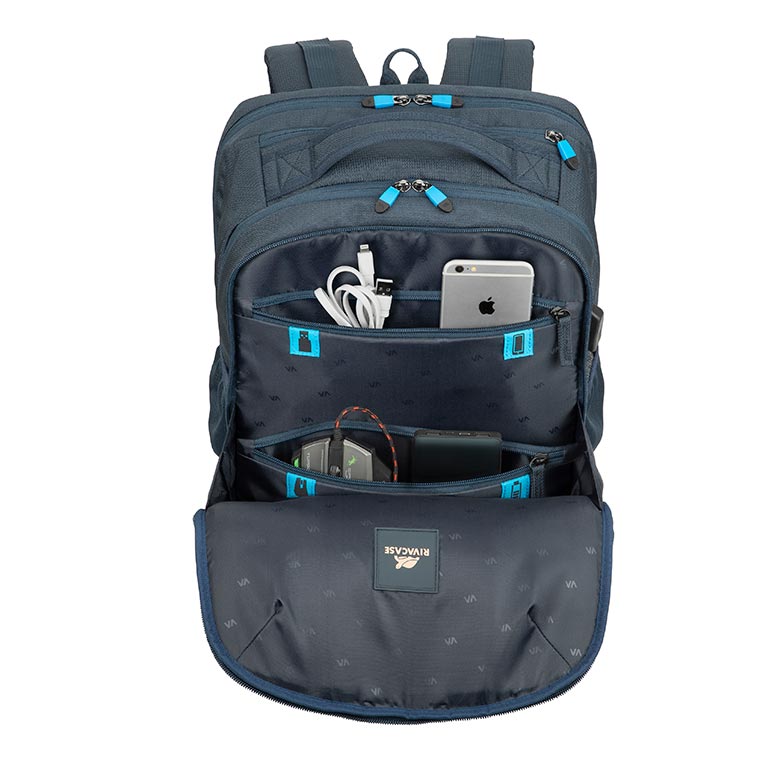 This slingbag is specially designed to carry and protect the DJI Mavic Pro, DJI Spark, Parrot Mambo and smaller enthusiast quadcopters and flying cameras. Created out of high-quality water-resistant fabric with shock absorbing EVA padding it will keep all your items in ultimate security. And with this bag quick on-the-go access to the main compartment with all your devices is possible and a capacious zippered section for a laptop, tablet and a compact drone is also provided. Dedicated inner pockets made of dense neoprene for better protection keep your drone and remote control safe. Comfortable soft handles and a shoulder strap with softened bands and a special anti-slide fixation strap will make you feel comfortable even during the longest journey. And, in addition to this, the shoulder strap features a smartphone pocket with a cable outlet for headphones so you can listen to music or a podcast when in transit. 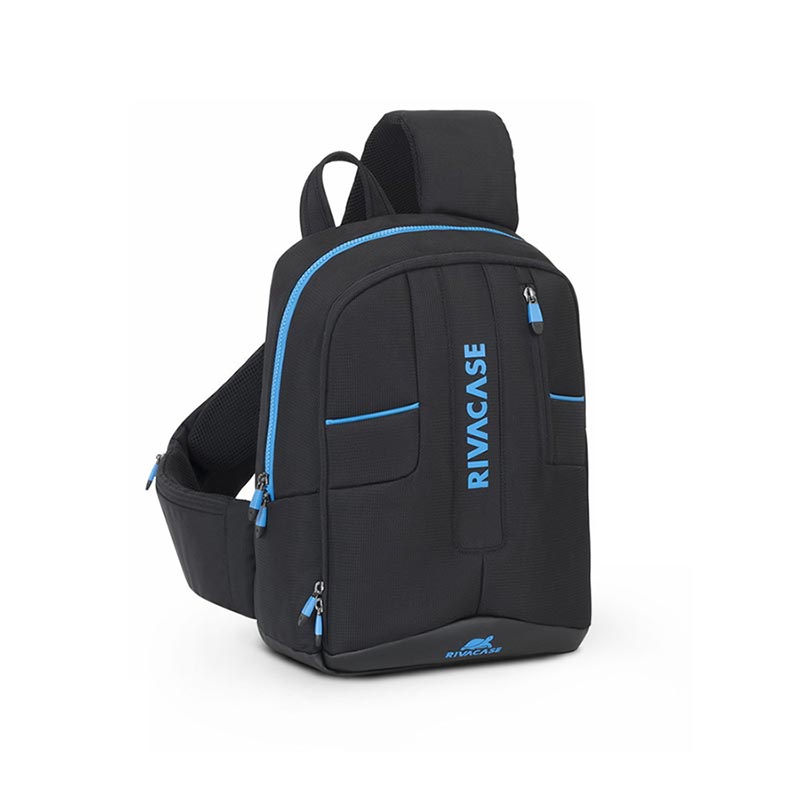 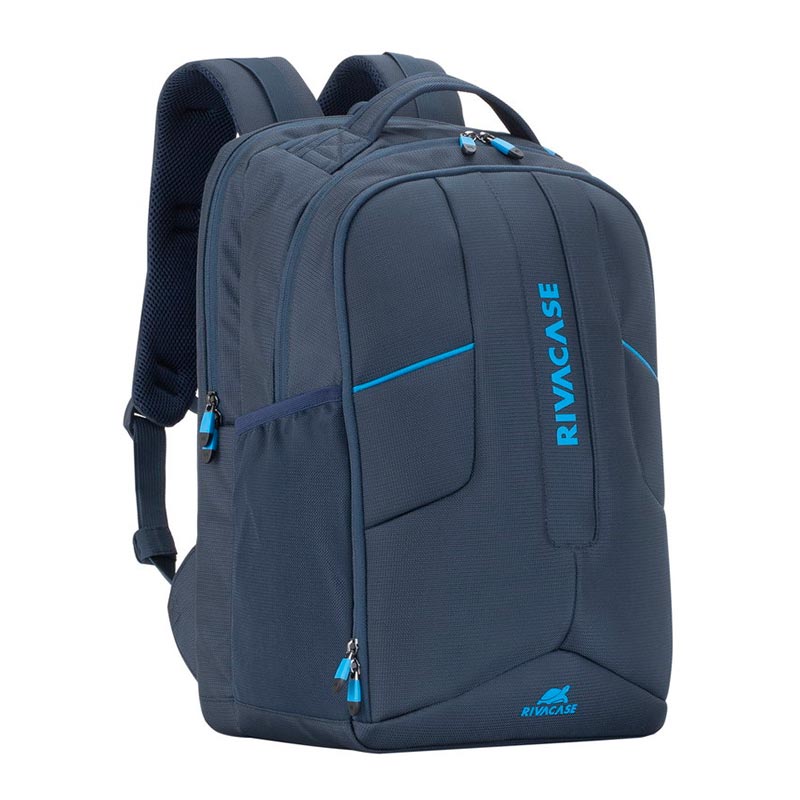 Aimed at entry price level, this multifunctional backpack is specially designed for professional gamers and ideal for business trips and travelling as well. High-quality water-resistant fabric with shock absorption EVA padding will maintain your items in complete security. The main laptop compartment comes with padded walls and bottom and an additional inner compartment for a Tablet up to 10". A capacious zippered section for all the necessary gaming accessories (headset, mouse pad, full-size keyboard and other stuff) is provided and plug your portable rechargeable battery into a USB port on the side of the backpack to charge your devices while on the go. A front zippered pocket for accessories, powerbanks, business cards, pens, smartphone and documents will keep all of your things nicely organised and an anti-theft hidden pocket on the back for a passport or wallet will keep your vital possessions safe.

This multifunctional backpack is specially designed for professional gamers but ideal for business trips and travelling as well. Created using high-quality water-resistant fabric with shock absorbing EVA padding, the main laptop compartment comes with padded walls and bottom, and an additional inner compartment for a Tablet up to 10". A capacious zippered section for all the necessary gaming accessories (headset, mouse pad, full-size keyboard and other stuff) is also provided. Comfortable soft handles, and shoulder straps with softened bands and a sternum strap will make you feel comfortable even during the longest journey. Full contact, super ergonomic design provides pleasant ventilation and keeps your back dry at all times. A trolley strap easily attaches the backpack to any rolling luggage to aid you when moving around stations or airports. And a rain cover is also provided to protect your bag if you should get caught out in a shower. 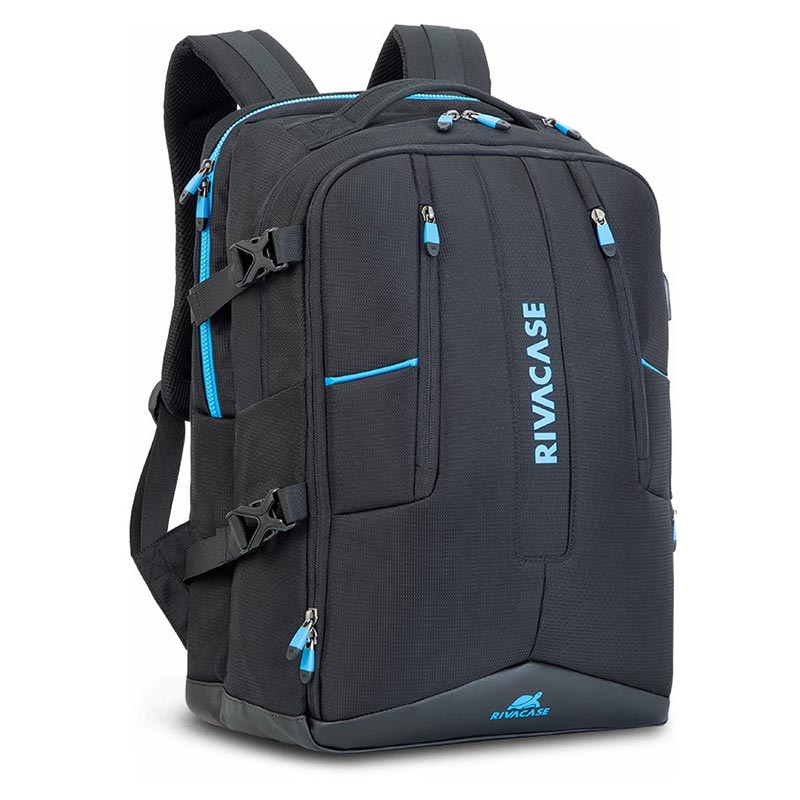 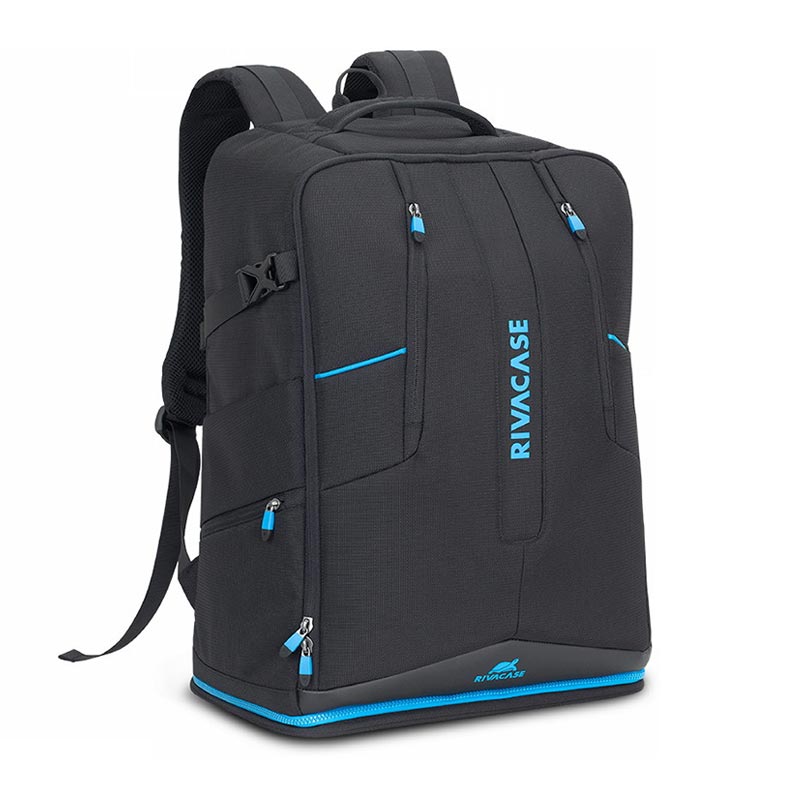 This drone Backpack for Laptops up to 16'' - is The winner of the annual TWICE Picks Awards on CES 2018. It is a backpack designed to carry and protect the DJI Phantom 3/4 and other similar sized quadcopters and flying cameras. It is a backpack whose plaudits speak for itself but to give you just some of its many features: The bag is made from high-quality water-resistant fabric with shock absorbing EVA padding. The backpack organisation system features flexible dividers, adjustable straps and compartments and is easily customisable to fit any specific quadcopter and its accessories. As well as a front zippered compartment, an additional compartment at the bottom of the backpack is provided for shoes or clothing and a zipper expansion system provides additional storage volume (extra depth - 11 cm). A side pocket gives you the option of carrying a water bottle with an additional zippered compartment for carrying small items. And a rain cover is also provided should you ever be unlucky enough to be caught in a heavy shower.