View products
Tiergarten park, located completely in the district of the same name, is not only Berlin's most popular inner-city park,  but it is also one of Germany's largest urban parks being over two square kilometres. A former hunting ground for the Eleonora of Brandenburg, it was originally fenced off to prevent animals from escaping. Friedrich Wilhelm I's son, Friedrich the Great though, did not have the same appetite for hunting and so instead opened the park's first public garden in 1740. Ever since then, it has become the quintessential escape for Berliner and German alike and fortunately no such fence exits today and it is free for all to potter about in and enjoy its many sights and amenities. Spaces for picnics and barbecues, for jogging and cycling are dotted around the place. A large play ground sits on the southeastern corner near Potsdamer Platz. The park offers the world famous Berlin Zoo as well as several monuments and English gardens, and even a possible ice skating rink during cold winters on the park's several small ponds. And, being characteristically German, access across the park couldn't be easier. A large tunnel crosses it providing easy movement from north to south for cars and trams and also the recent S-Bahn train. With the Tiergarten range we have sought to capture everything that is essentially German about this iconic park and translate it into a range that works for the customer's needs. Everything has been designed in a way that reflects the careful process of construction that underpins all the best German construction and engineering. The result is a range that is supremely functional and suited to everyday usage.

In this most “German” of our collection, everything is clear and understandable. The Tiergarten range comes with many pockets for carrying and storing small items and belongings. Reliable metal fittings create durable bags for long term use. Strictly corporate in design it is a collection for those who choose practicality. The fabric with small weavings gives the products volume.  A light lining allows you to find even the smallest item in the bag. The wide and flat pullers are ultra-convenient to use, and the increased surface of the puller is supplemented with small veins for a comfortable  grip when using.

These days you have to ensure that your baggage is waterproof. Gone are they days when all you need to do is to ensure that your documents don't get a little damp. Nowadays we all carry with us highly expensive, highly delicate devices that are hugely susceptible to water damage and which contain all of our most important information. That is why we have made sure that this Tiergarten range is made with high-quality water-resistant fabric so that you can move about your day with ease, safe in the knowledge that should you get stuck in a shower, your items will remain protected.
+ 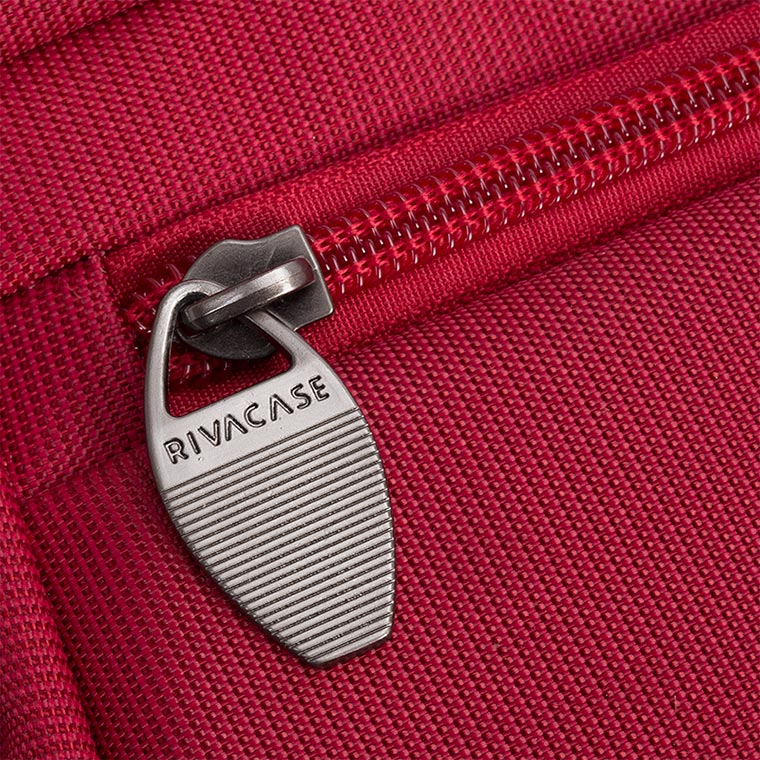 There is nothing worse than cheap and badly made pullers on bags. Typically and inevitably they always break and fail you at the least optimal time. It tends to be when you're in the middle of an airport concourse and leads to your items being strewn over the ground with seemingly no solution in sight, and when you still have a plane to catch! That is why we have made sure that this Tiergarten range has been designed with specially crafted metallic pullers so that you can be rigorous with your bag and yet rely on it always to get you through even the toughest of journeys.

In all aspects of this bag functionality has been at the forefront of design. You often find with some brands that ergonomics has been sacrificed on the altar of style. Here at RIVACASE and typified by this Tiergarten range, the way in which every element of the bag functions is what has been paramount during the design process. That is why we have made this collection with durable metallic hardware. This means that, like the best German engineering and design, it is a bag that you can depend on time and time again.

Just because this is a hugely well designed and deeply functional range, doesn’t mean that we have sacrificed anything in the way of style. Although functionality, when done well, is in itself a kind of beauty, we have made sure that this bag still looks as impressive as it is exceptional to use. One such way this has been done is through the herringbone patterned strap. Using this very traditional pattern but in a very fine and subtle way gives the range the kind of sophistication that is synonymous with RIVACASE and will make sure you have the appropriate look no matter the destination.
+ 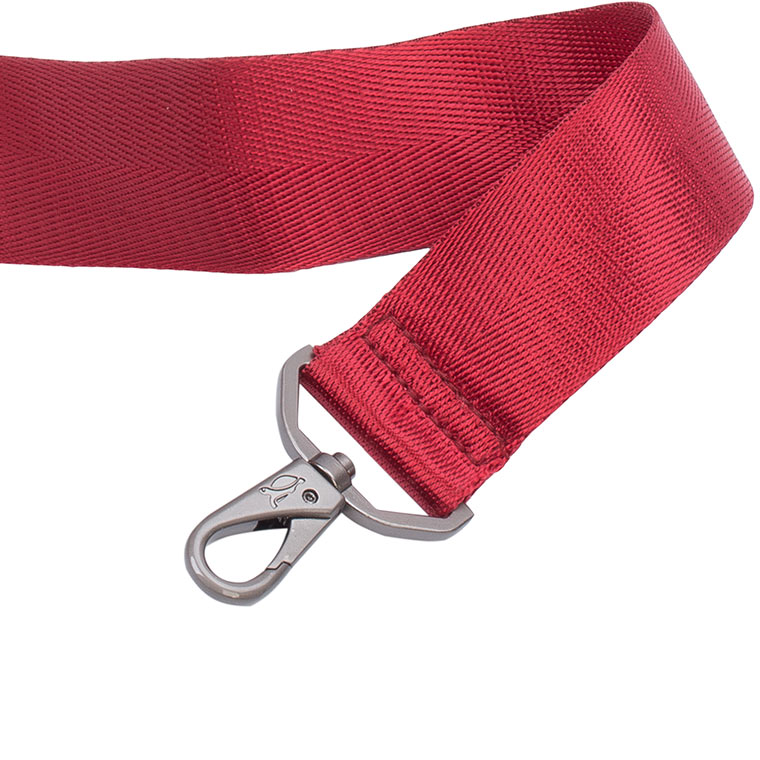 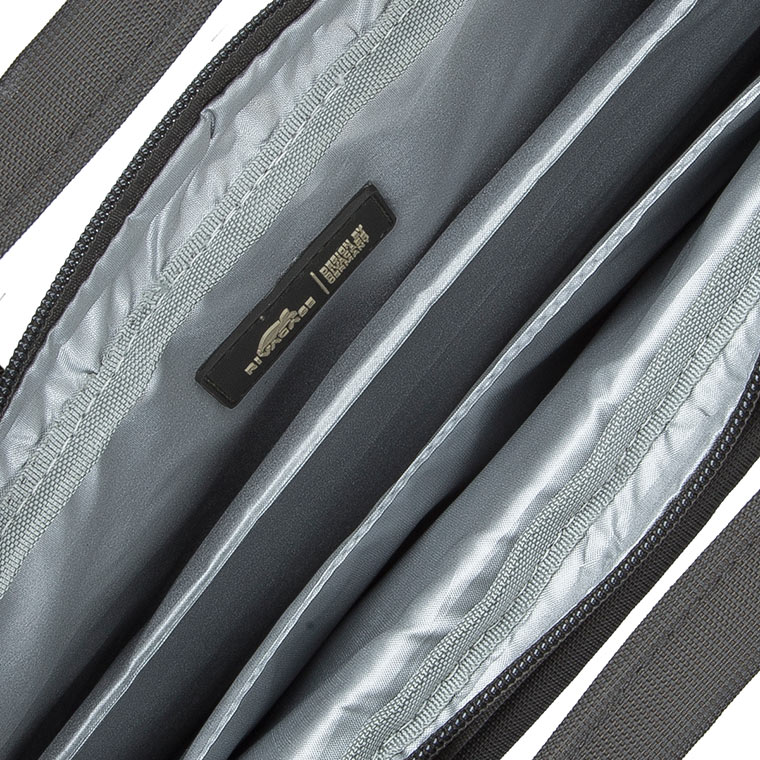 Where functionality meets aesthetics is the holy grail of design. If you can craft something that makes it easy to use but at the same time is a thing of beauty then you have created something special. With all aspects of the bag we have focused on achieving this and no where is this more impressive than in the silver interior lining of the Tiergarten range. The lighter colour will help you quickly find whatever item you need at a moments notice even if it's a little dark, and the soft silver fabric and colour will be that extra special flash to impress your boardroom compatriots.

Cushioned pocket for a Tablet

Although this laptop bag has been created just for that - your laptop, it is also the perfect option for carrying your tablet with you should you need to take that on your journey. Everything has been done to maximise the security of your items in this collection and never is this more true than in the specially cushioned pocket for your tablet. Simply slip it away in the space specially designed for it and you can rest safe in the knowledge that your most precious items will remain free from harm and rest safe and secure.
+ 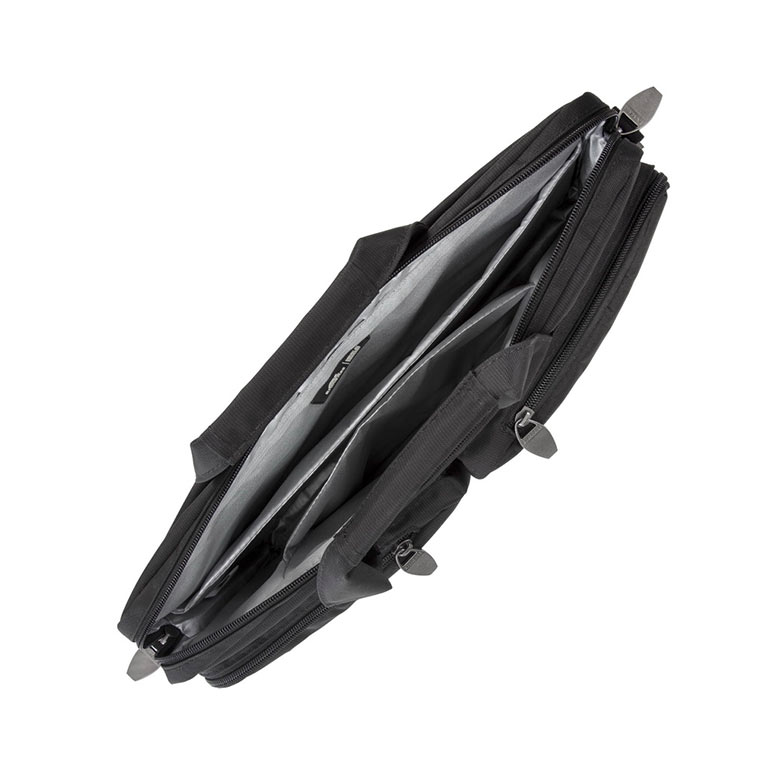 This Tiergarten laptop bag has been designed to fit laptops up to 16" in dimension.  Made of water-resistant polyester it comes with a contrasting silver lined interior which adds to its aesthetics and functionality.  A separate laptop compartment, provides you with a section for documents and a pocket for Tablets up 10.1’’. Two external pockets are located on the outside to quickly stow away  accessories, business cards and a smartphone. Dual zipper pulls enable quick and easy access to all of your belongings and comfortable padded handles and a removable adjustable strap with an anti-slip shoulder pad allow you to sling the bag over your shoulder for those longer journeys. 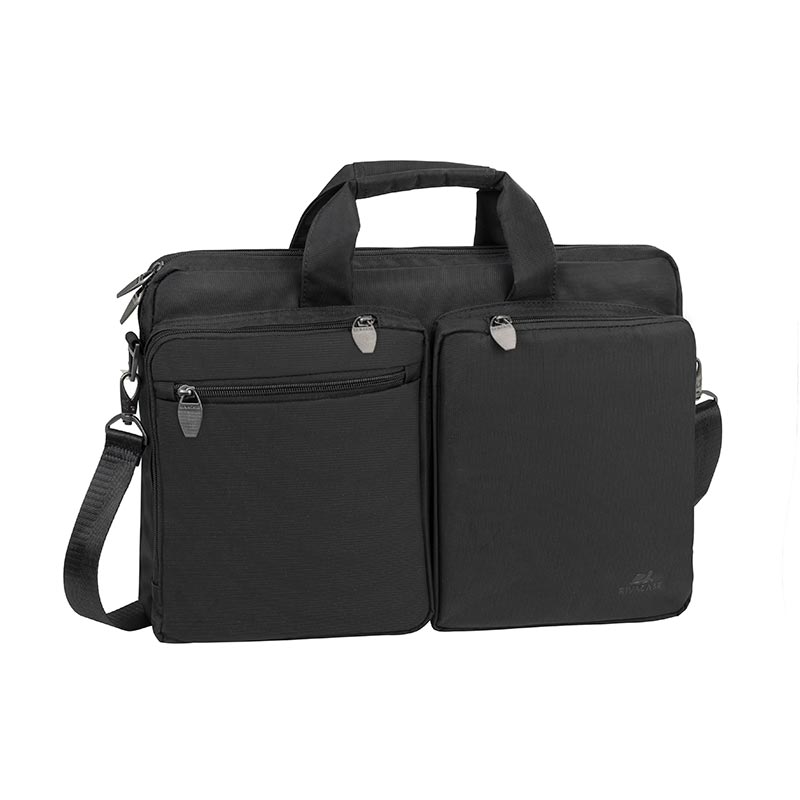 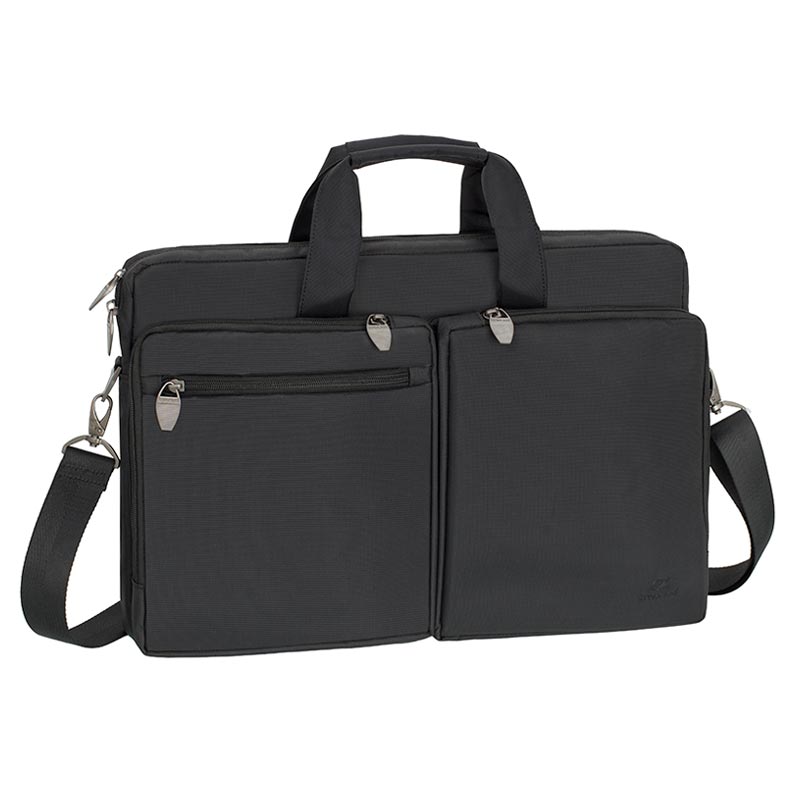 This specially designed laptop bag is one of the larger ones in the range and is the perfect option to fit laptops up to 17.3'' in dimension. It will ensure that your items are kept free from damage due to its water-resistant polyester surface. An outer compartment will easily accommodate all the necessary accessories and documents should you need to quickly slip something away. And because sometimes with these larger bags you might be carrying quite a weight, comfortable padded handles and a removable adjustable strap with an anti-slip shoulder pad is provided to add to the functionality.

Designed to fit laptops up to 15.6“ in dimension, this bag from our Tiergarten range is the acme of functionality. Created out of water-resistant polyester it is sure to keep your devices free  from water damage. As well as the large compartment, a section for documents and a pocket for Tablets up 10.1’’ is provided and designed using a contrasting silver lined interior. Dual zipper pulls give quick and easy access to two external pockets for accessories, business cards and a smartphone. And comfortable padded handles and a removable adjustable strap with an anti-slip shoulder pad will lead to a smooth journey for you, whatever the destination. 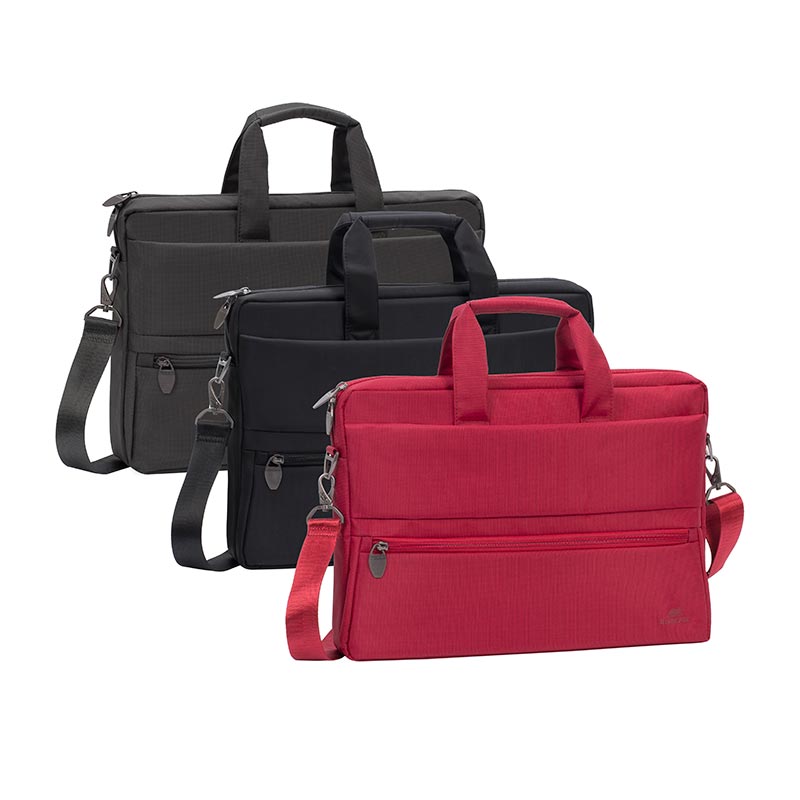